Aphrodite, The Goddess of Love 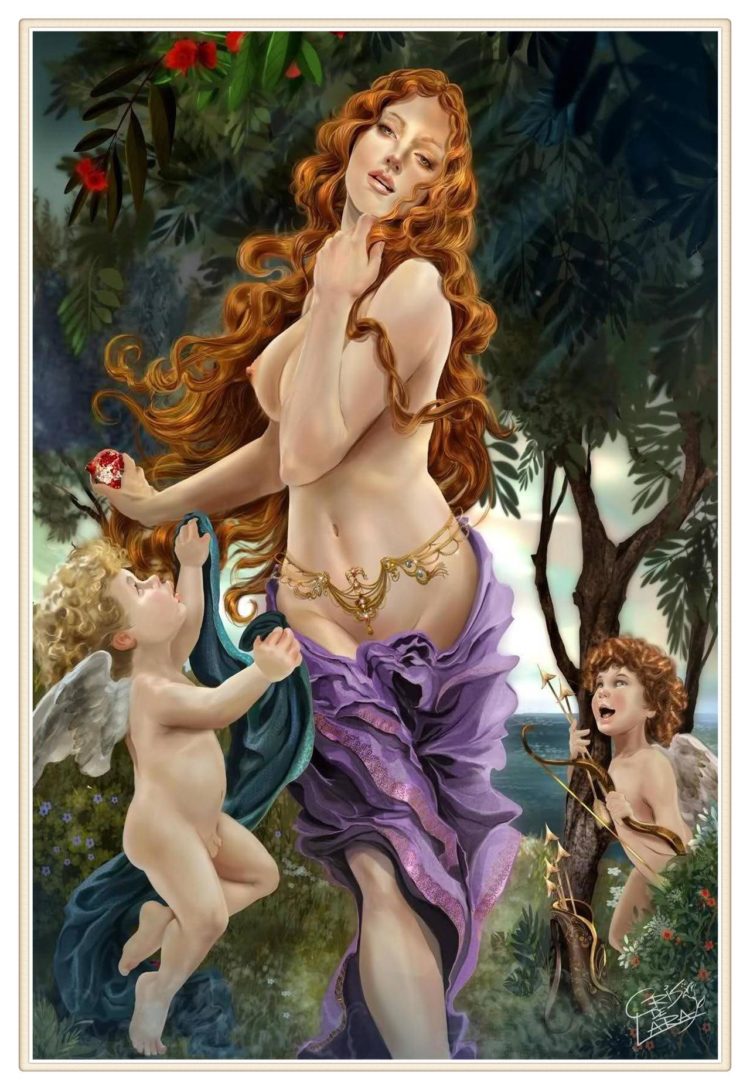 Aphrodite is an ancient Greek goddess associated with love, beauty, pleasure, and procreation. She is identified with the planet Venus.
Her major symbols include myrtles, roses, doves, sparrows, and swans.

According to Hesiod’s Theogony, she was born from the foam in the waters of Paphos, on the island of Cyprus. They say she arose from the foam when the Titan Cronus slew his father, Uranus, and threw his genitals into the sea. Another version of her origin is from Homer’s Iliad, who wrote that she is the daughter of Zeus and Dione. As with many Greek deities, there are various stories of her origin.

Aphrodite was so beautiful that she caused problems among the other gods, as each of them wanted to have her for himself. To prevent any greater conflict, Zeus hurriedly married her off to Hephaestus, the ugliest of the gods. He felt this would prevent jealousy. However, it only temporarily alleviated the problem, because Aphrodite didn’t remain a faithful partner.

She first started an affair with Ares, the god of war. But Helios saw them, and told her husband, Hephaestus. So Hephaestus devised a plan to trap the couple with a bronze net he created to catch them the next time they were together. His plan worked, and he called on the other gods to mock them. They were only freed after Poseidon agreed to pay for their release.

But Hephaestus’s plan backfired on him. Because after seeing Aphrodite naked, Poseidon fell in love with her all over again. And another affair ensued. Also, it didn’t stop her ongoing affair with Ares. Aphrodite ended up giving Poseidon a daughter, Rhode, and bore Ares eight children : Deimos, Phobos, Harmonia, Adrestia, and the four Erotes (cupids), Eros, Anteros, Pothos, and Himeros.

She had at least two more affairs with other gods. She had one with Hermes, and created their offspring, Hermaphrodites. Also, with Dionysus, of which Priapus was born.

One day, she found a baby boy alone beside a myrrh tree. She decided to take him to the Underworld and asked Persephone, Queen of the Underworld, to take care of him. After many years, she went back to visit him, and fell instantly in love, and asked to take him back. But Persephone wouldn’t allow it. So Zeus had to step in to mediate between the goddesses, and ordered that Adonis must divide his time between the two. However, Adonis preferred Aphrodite, and when the time came for him to go back to Persephone, he refused. So Persephone sent a wild boar to kill him, and he bled to death in Aphrodite’s arms.

The second mortal love affair was with Anchises, a Trojan Prince. She pretended to be a Princess and seduced him into sleeping with her. Afterward, she revealed herself, and promised him a noble son in exchange for keeping silent about their affair. To his demise, he didn’t keep his word. As a result, Zeus struck him with a thunderbolt which blinded him, and he was never able to see his son again after that.