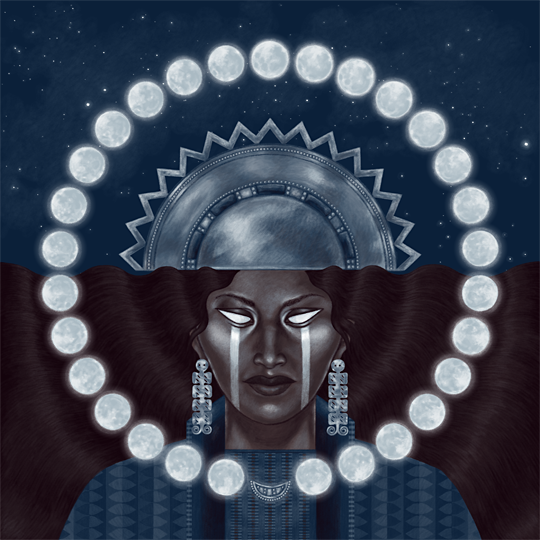 Mama Quilla is the Incan moon goddess. She is also known as Mama Killa, or Mother Moon. She is considered a defender of women. As such, she also the goddess of marriage and the menstrual cycle. Mama Quilla was important for the Inca calendar, because for them, she was responsible for calculating the passage of time. In Cuzco, Peru, the capital city of the Incan Empire, she had her own temple with priestesses whom were dedicated to her.

Mama Quilla is the daughter of Viracocha, Supreme Creator God, and Mama Cocha, goddess of the sea. She is the wife and sister of the sun god, Inti. Her sister is Pachamama, the earth goddess. She had four children: Manco Cápac, the fire god and first ruler of the Incas, Mama Ocllo, the goddess of spinning, Pachacamac, the earth creator god, and Kon, god of rain and the South wind.

The Incas believed that the dark spots on the moon where there because a fox fell in love with her because of her beauty, and rose into the sky to be with her. When he got there, she squeezed him so close against her, it produced the dark patches we see.

The Incas feared lunar eclipses because they believed that the they were caused by an animal (possibly a mountain lion, serpent or puma)  trying to attack Mama Quilla. In attempt to scare away the animal, they would throw weapons, make wild gestures, and create as much noise as possible. They believed that if the animal succeeded in swallowing the moon, the world would be left in darkness.

They also believed that Mother Moon cried tears of silver.