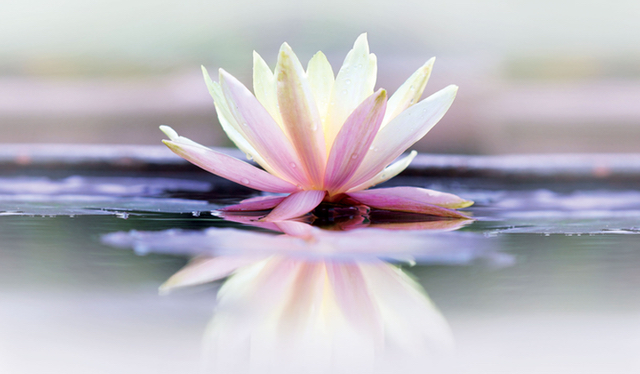 The traditional symbol for yoga is often the lotus flower or water lily. Buddhists consider the petals to depict the opening of the heart. The flower represents our ability to come from a place of suffering into the light, much like the lotus, whose roots start in the muddy earth and rise up through the water to the light of the sun. This reminds us that we too can rise up from any difficult situation and reconnect to the light that surrounds us. The lotus asana is one of the best for meditation as it increases concentration. However, it is advised to work slowly towards the full pose, starting out with half lotus, as it can be strenuous on the knees and hip joints.

Anybody who has ever observed a lotus flower emerging from a murky pond cannot fail to see the beauty of this exquisite plant.

The flower always looks so clean and pure against the background of the dirty pond.

Because of this the lotus flower has come to be associated with purity and beauty in the religions of Buddhism and Hinduism respectively; the ancient Egyptians scholars observed that in the night-time the lotus closed its flowers and sank into the water, and came up with a different association with the flower related to rebirth and the Sun; in actual fact the Lotus slowly emerges from a pond over a three day period and then blooms in the morning until mid-afternoon.

It can therefore be assumed that the lotus flower meaning is different between cultures, though in fact they share many similarities.

I would like to explain how some of these associations came about, and I will therefore split up this article into three main sections, based upon the three main groups, that is to say that of the ancient Egyptians, the Buddhists, and Hinduism.

Meaning of the Lotus Flower to the Ancient Egyptians

Anybody who has taken a look at Egyptian culture cannot fail to have noticed the significance of the meaning of the Lotus flower in their culture.

In ancient Egypt there were two main types of lotus that grew, the white, and the blue (scientifically a waterlily, but symbolically a lotus). Further to this another type, the pink lotus flower was introduced into Egypt sometime during the late period of their civilization. If one is to observe the many hieroglyphics, it is easy to see that the blue Lotus flower is the most commonly portrayed.

As mentioned in the introduction above about the meanings of the lotus flower, this plant is known to be associated with rebirth. This is a consequence of it supposedly retracting into the water at the night, and emerging a fresh in the Sun the next day (see the introduction for how a lotus plant actually comes into bloom). The Egyptians therefore associated the lotus flower with the sun which also disappeared in the night, only to re-emerge in the morning. Therefore the lotus came to symbolize the Sun and the creation. In many hieroglyphics works the lotus is depicted as emerging from Nun (the primordial water) bearing the Sun God.

As something that is associated with rebirth, it is no surprise that the lotus flower is also associated with death, and the famous Egyptian book of the dead is known to include spells that are able to transform a person into a lotus, thus allowing for resurrection.

Another interesting fact about the lotus flower meaning to the Egyptians was the way that it was used as a symbol for the unification of the two Egyptian kingdoms, that is to say the bonding of upper and lower Egypt. For a long time the lotus had been used in the hieroglyphics and art of upper Egypt, whereas in lower  Egypt the Papyrus plant was notably in abundance. Therefore pictures of lotus and Papyrus that had grown up together and become inter-wound with each other came to be a symbol of the bringing together of the two kingdoms.

As Buddhism stems from a different part of the world to Egyptology, there are many more colors of lotus to be seen. So it is not too surprising that the many different colors have come to be associated with  different aspects of Buddhism. The main symbolism of the lotus flower and their meanings are given here.

The Lotus Flower and its Meaning in Hinduism

Perhaps one of the strongest associations of the lotus flower with religion is that that is observed in Hinduism. In this religion the lotus flower meaning is associated with beauty, fertility, prosperity, spirituality, and eternity.

The most common lotus form seen in Hinduism is the white lotus flower.

Many of the gods and goddesses of Hinduism are linked to the flower, for example the goddess of prosperity, Laxmi, is usually depicted as being seated atop a fully opened lotus flower. Likewise Brahma, the god of creation is depicted as emerging from a lotus that crawls from the Naval of the sustainer Lord Vishnu.

As a lotus is able to emerge from Muddy Waters un-spoilt and pure it is considered to represent a wise and spiritually enlightened quality in a person; it is representative of somebody who carries out their tasks with little concern for any reward and with a full liberation from attachment.

It is very interesting how the open flower and the unopened Lotus bud forms are associated with human traits. The unopened bud is representative of a folded soul that has the ability to unfold and open itself up to the divine truth.

It is hoped that you now have a better understanding of the lotus flower meaning across the three major cultures in which it is known to play (or have played) a major role. It is no wonder that these civilizations, have found wonderment in such a beautiful flower.