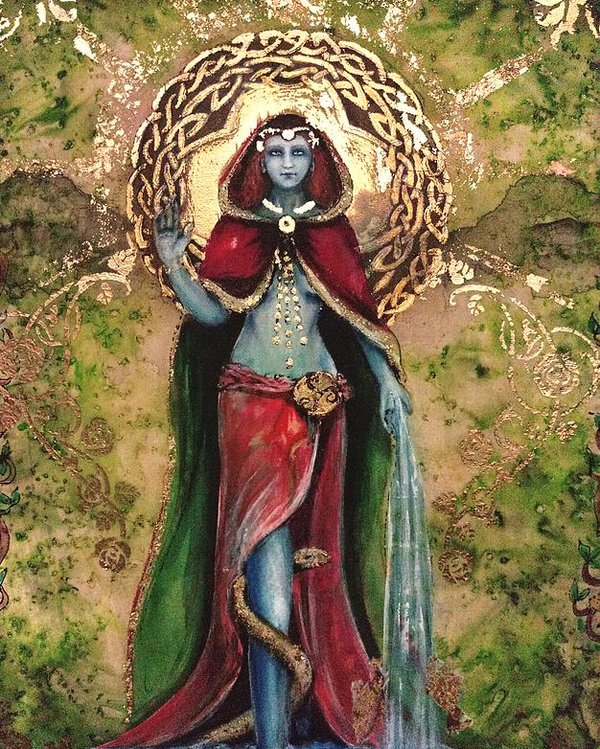 Danu is a popular Celtic Goddess, but not much is known about her. She is considered to be the oldest of all Celtic deities. In Celtic mythology, she is the mother of the gods, who birthed all things into being. She is the goddess of earth, fertility, wisdom, wind, and of all the Celtic people. She is also associated with fairies and fairy lore.

Danu is the Mother of The Tuatha De Danann, the Irish Gods, which literally means the Children of Danu. All the Danann can trace their Lineage back to her. The Danaan were a group of people who had been exiled from Ireland, and scattered. In Irish folklore, they are known as the fairy people who are skilled in magic. It is thought that Danu offered them her patronage, which helped them to reband and learn new magic skills. With that, they were able to return to Ireland in a magical mist. The mist is thought to be the caring embrace of Danu herself. She is seen as having nurtured these broken people back to strength, and imparting magic and esoteric wisdom to them. For this reason, the Tuatha Dé Danaan were associated with craftsmanship, music, poetry and magic, and Danu herself.

Danu is also represented as being the goddess of rivers and water, in addition to those who worked amongst the various bodies of water, such as fishermen and sailors. It is said that the name Danu means “flowing one.” As such, her name is usually associated with the Danube river. Some also believe that the name Danu had been connected with the River Don, in Scotland, and the Rivers Don, Dniestr, and Dniepr in Eastern Europe.