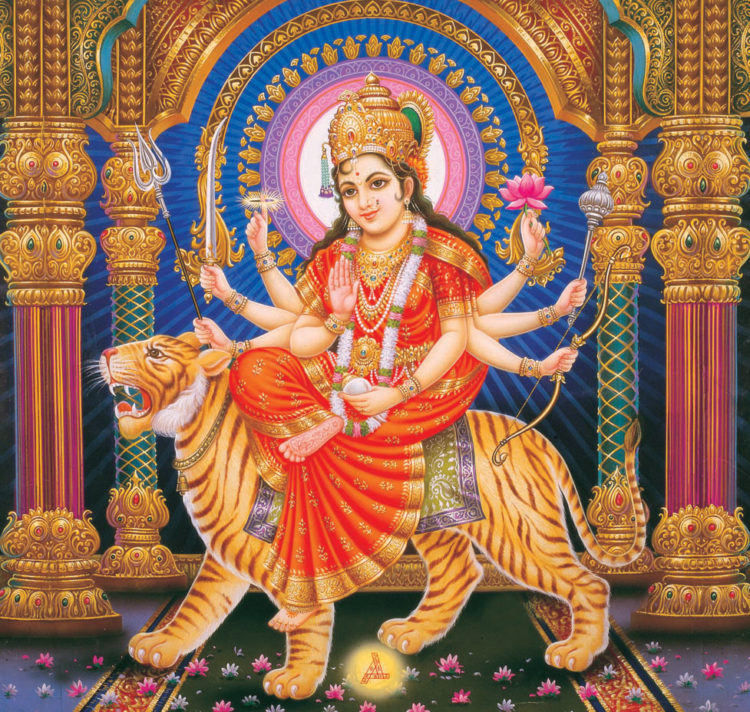 In Hinduism, the goddess Durga, is the protective mother of the universe. She is one of the principle forms of Shakti, the divine female energy in the Hindu religion. Durga is the warrior goddess. As such, she is willing to unleash her vengeance in order to combat evil and demonic forces that threaten peace and prosperity. Goddess Durga represents the power of the Supreme Being that preserves moral order and righteousness in the creation. In Sanskrit, Durga means “a fort” or “a place that is difficult to overrun.”

Originally, she is Adi Parashakti, the ultimate female energy present in the universe before creation. The gods invoked her to defeat the demon, Mahishasura. Her manifested form emerged from the gods themselves. Before the war, she was gifted with different weapons, ornaments, valuable clothes, jewelery, and a lion or tiger as her mount.

Goddess Durga is depicted as a warrior woman with eight hands carrying weapons of different kinds. Each hand assumes a mudra, a symbolic hand gesture, that represents her teachings. She is usually shown wearing a red sari. The color red symbolizes action. Often, Durga is depicted as riding on a lion or tiger. A tiger symbolizes unlimited power, and so so her riding one indicates that she possesses unlimited power. The lion is a symbol of uncontrolled animalistic tendencies (such as anger, arrogance, selfishness, greed, jealousy, desire to harm others etc.). Her sitting on a lion reminds us to control these qualities, so that we are not controlled by them. 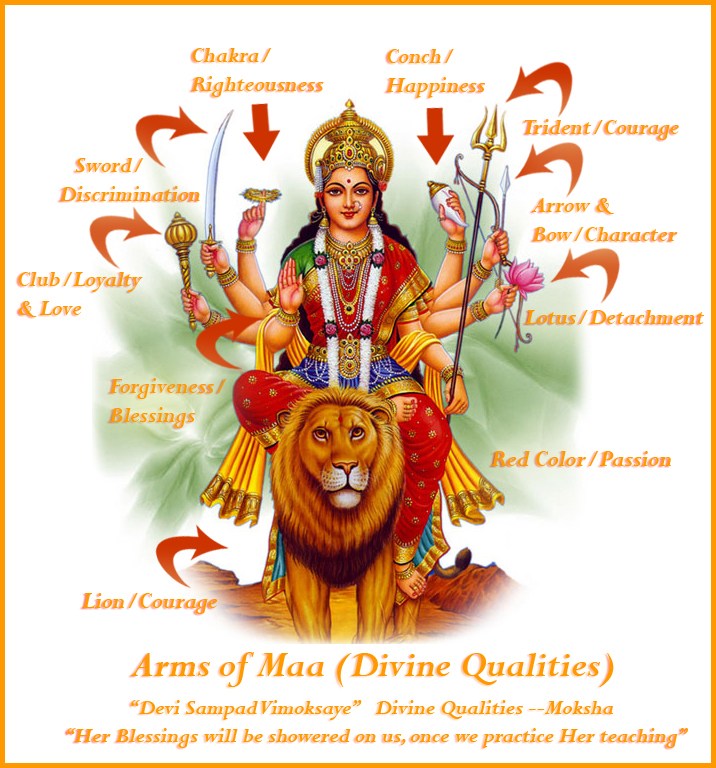 • Chakra in her 1st upper right hand symbolizes dharma (duty/righteousness). We must perform our duty/responsibilities in life.

• Conch in her first upper left hand symbolizes happiness. We must perform our duty happily and cheerfully and not with resentment.

• Sword in her second right lower hand symbolizes eradication of vices. We must learn to discriminate and eradicate our evil qualities.

• Bow and arrow in her second left lower hand symbolizes character like Lord Rama. When we face difficulties in our life we should not lose our character (values).

• Lotus Flower in her third lower left hand symbolizes detachment. We must live in the world without attachment to the external world. Just like the lotus flower stays in dirty water yet smiles and gives its beauty to others. This is the only way to receive Her blessings.

• Club in her third right lower hand is the symbol of Hanuman and symbolizes devotion and surrender. Whatever we do in our life we do with love and devotion and accept the outcome as the Almighty’s will.

• Trident/Trishul in her fourth left lower hand symbolizes courage. We must have courage to eliminate our evil qualities and face the challenges in our life.

• Fourth Lower Right Hand symbolizes forgiveness and Her blessings. We must forgive ourselves and others for mistakes and/or any hurt we may have caused.