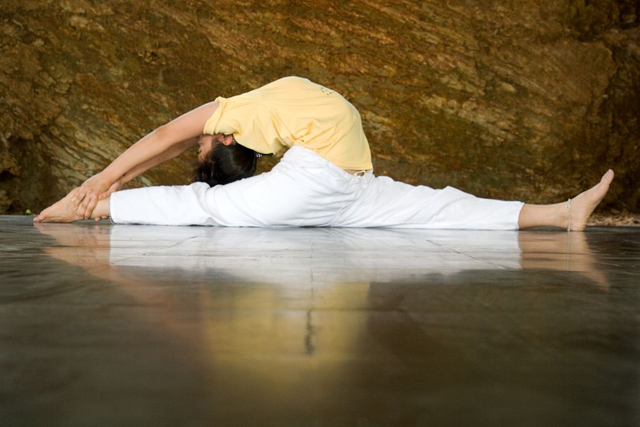 Sivananda Yoga comes from the lineage of Swami Sivananda, as brought to the west by his disciple Swami Vishnudevananda in the late 1950s, making this style of practice an important part of yoga’s first wave of popularity outside India

Sivananda (1887-1963) was well-known in India in the 1930s, when he founded an ashram in Rishikesh. He had previously been a practicing doctor. Because he spoke English well and wrote many treatises in English, he was sought after by western students who wished to study yoga and Vedanta. He founded the Divine Life Society in 1936 to organize and disseminate his teachings.

Sivananda’s yoga and philosophies traveled west courtesy of several influential disciples. One was Swami Satchidananda, who founded Integral Yoga. Another was Vishnudevananda, who came to North America in 1957 and soon started the first Sivananda Yoga Vedanta Center in Montreal, Canada. The key philosophical points and yoga methodology associated with Sivananda Yoga were the efforts of Vishnudevananda on behalf of further spreading his guru’s messages.

Today there are Sivananda Yoga Vedanta Centers in major cities in the U.S., western Europe, South America, and Asia, as well as nine ashram retreats.

The Sivananda method is based on five principles for optimal health and spiritual growth, as described by Vishnudevananda. They are:

A typical class begins with pranayama exercises. After warming up with sun salutations, the focus is on mastery of the twelve basic poses in the following order:

Savasana closes the class. The poses are ideally done slowly and with control to stretch and strengthen the body as well as open the chakras.

The 12 basic poses of Sivananda include a little of everything: inversions, backbends, forward bends, twists, balances, and hamstring stretches. As students become proficient in the 12 basic poses, variations may be introduced.

Is Sivananda for You?

The goal of this practice is to promote physical, mental, and spiritual well-being. The asana system is fairly fixed, so you must enjoy working slowly and methodically to fully master the prescribed poses. An interest in Indian philosophy is also a good indicator that you’ll enjoy Sivananda yoga