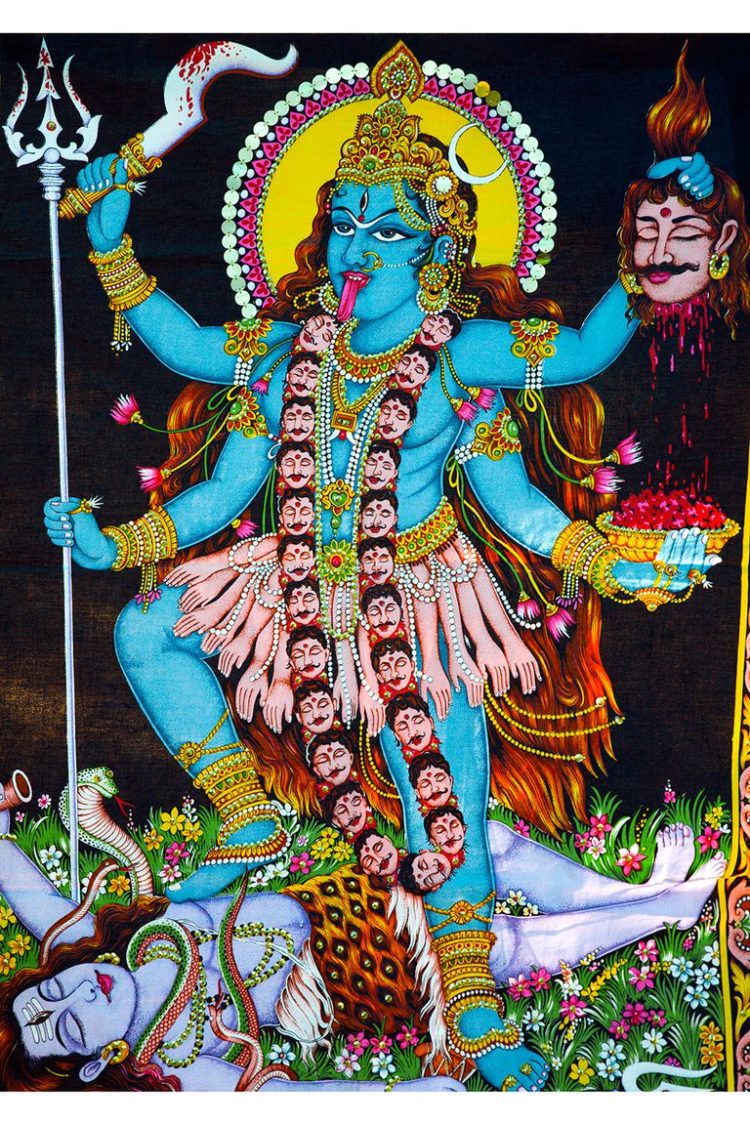 Kali is a complex goddess who is known as the destroyer of evil forces. She was first mentioned in ancient texts not as a goddess, but as one of the seven black tongues of Agni, the Hindu god of fire. She emerged as an individual later, as a demon slayer. There are different variations to her story, but a common one is that of her slaying of the demon, Raktabija.

While the god Shiva was secluded in meditation, demons from the underworld began an attack on the gods. (Although he later came out of seclusion after being seduced by Parvati– but the situation had already gotten out of hand.) One demon, in particular, Raktabija, was incredibly difficult to defeat. He had a super power that turned his spilled blood into new demons. So the goddess Durga, the protective mother of the universe, birthed Kali from her brow to slay the demons. Kali outwitted Raktabija by lifting him into the air, devouring him with her teeth, and drinking his blood before it spilled onto the ground. After she defeated him, she went on to slay the other demons. She was on such a bloodthirsty rampage, that after she slaughtered all of the demons, Lord Shiva could only stop her by throwing himself under her feet. Stunned at this sight, Kali stuck out her tongue in shock and put an end to her killing spree. It is from this scene that Kali is most depicted.

She has black skin which is often shown as blue. The blackness represents her devouring, transcendental nature. Just as the color black absorbs all other colors, all other names and forms disappear within her. She has four arms, one with a sword, one with the head of a demon, and the other two hands to bless her worshippers. She wears a necklace of fifty human skulls, which represent the fifty letters of the Sanskrit alphabet, and symbolizes infinite knowledge. She also wears a skirt of severed human hands that signifies work and freedom from the cycle of karma. Her three eyes represent past, present, and future- the three modes of time. In sanskrit is “kala” means “time,” so time is also an attribute of her name, Kali.