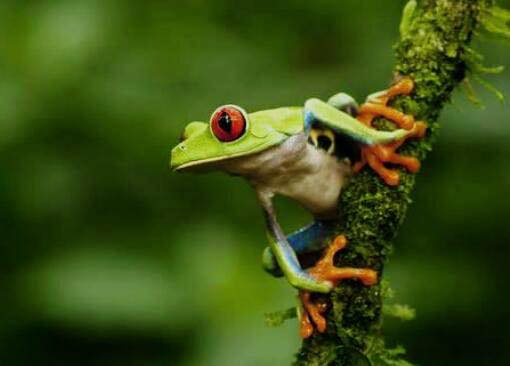 Range: The Red-Eyed Tree Frog is found from Southern Mexico to eastern Panama including Central America. They are found more on the Caribbean coast of Cost Rica and in small numbers in the lowlands on the pacific side. They are also available in Panama, Honduras and northern side of South America.

Size: Red-Eyed Tree Frogs will get a length to 1.5 to 2.75 inches (4 to 7 centimeters). The females are larger than adult male and almost twice to them.

Weight: The male and female weigh from 6-15 grams.

Diet: Red-Eyed Tree Frogs are carnivorous and they feed mostly moths, insects, crickets and small insects that are available on the night including small frog.

Habitat: The Red-Eyed Tree Frogs reside in lowland moist rainforest areas, wet forest, near ponds, rivers, streams and mangroves. The Red-Eyed Tree Frog is also available close to water sources like offspring, tadpoles. They can also survive at the height of 1,200 meters but have a tendency to stay at lower elevations. It can also be found in the national parks of Costa Rica.Tilarán, Cabo Blanco, La Selva Biological Station , Tortuguero National Park, Arenal Volcano National Park

Breeding/Reproduction
The Red-Eyed Tree Frog mating takes place from October to March. The males make an effort to attract the females through their ‘croak’. Once they get their female, they fight other frogs to perform the coupling. The female will lay a clutch of eggs on the underneath of the leaf that are above the water source and then the male will fertilize them. Once the eggs have hatched, the tadpoles proceed into the water where they will develop. Once they are developed like a frog, they go to the trees with their group where they live for the rest of their lives.

Red-eyed tree frogs are medium to small sized tree frogs. They are having red eyes according to their name with narrowed noses. They have a vivacious green body and yellow, blue perpendicularly striped sides, with yellow and orange webbed toes and feet. A regional variation is seen in their edge and thigh color. The Red-eyed tree frogs are mostly found in the jungles of Costa Rica. Although scientifically named Agalychnis callidryas are of bright colors and this brightness function as signals, these statements have not been confirmed yet. Male frog’s size ranges from 5 centimeters to 6.30 centimeters, (2-2½ inches) where female’s size ranges from 6.30 centimeters to 7.60 centimeters (2½-3 inches) on an average. The juvenile frogs are normally brown color and become green with the maturity. The adults can also change color to some extent depending on temper and circumstances. They have spongy, delicate skin on belly and skin on the back is more thick and rough.

The red-eyed tree frogs have 3 eyelids and muggy pads on the toes. Some tree frogs spend a maximum period of in trees, and they are also great jumpers. Red-eyed tree frogs depend on camouflage to defend them. The whole day, they are calm or do not move and wrap the blue sides with the back legs. They also tuck the bright feet below their abdomen, and close the red eyes. So, they become visible almost green, and hide themselves well with the foliage.

Red-eyed tree frogs are nocturnal and they usually eat crickets, flies, moths, and insects. They also eat small frogs. They hunt in the night time only.

During the mating period, the male frogs vibrate the branches where they are sitting to improve the chances of getting a mate. This is initial proof that provide vibration for communication. Some frogs try to communicate by making deep sounds or high sounds to mate.

During the rainfall matting is at peak, males draw the female’s attention. The female carries him on their back for some hours. The female takes position on a leaf over a pond and lays the eggs there. The eggs take several days to be developed in small tadpoles and after some days it falls in the water. Dragonflies, water beetles and fish attack these tadpoles. They stay in the water for about three weeks to a few months, till they developed to a complete frogs.

This species has become very rare recent days. Commercial & residential development, Agriculture & farming in urban areas, Pollution, many have been red listed as the threats to the survival of the Red-eyed tree frogs by the IUCN.

You will find plenty of them in the Goddess Garden Eco Resort. Not only this kind of frogs, but some others too!